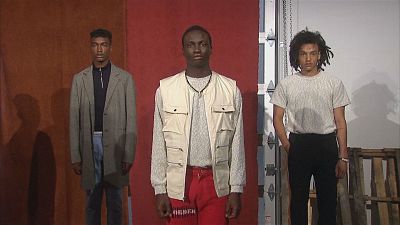 Men’s Fashion Week in New York got off to an exciting start on Monday with an international theme, courtesy of designers making a name for themselves.

David Hart is based in New York City. But his 2018 Spring/Summer collection took tourism in Cuba as its theme, showcasing light summerwear.

“It is really about this romanticised vision of Cuba that I have been exposed to through film and media and photography and music,” he said.

Although just in its fifth year, ‘New York Fashion Week: Men’s’ is fast becoming an important stop on the fashion circuit.

He dressed male models in boxy fits and bright colours.

“This collection was pretty much inspired by colonialism and post-colonialism in western Africa,” he said.

“And also referencing the youth culture during that time period. So I took inspiration from African contemporary photographers like Malick Sidibé, Seydou Keita. And they pretty much captured the attitude of Africans post-colonialism and how they reacted to Western influence.”

.@_headofstate's latest is an attempt to reconnect with the designer's upbringing.https://t.co/bDvBQV47bx

The event mostly dropped the traditional catwalk associated with large fashion shows and designers instead had models stand in large spaces to showcase the clothes.

Quoted in the “New York Times”, he said: “I wanted to show something shiny in a world of confusion”.