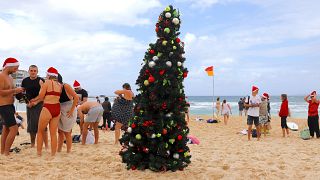 Cold and lack of sunshine didn't stop Christmas revellers stripping down to their bikinis and Santa hats on Australia's Bondi Beach.

Lifesavers even put up a Christmas tree to create a festive atmosphere for those making the beach their home for the day.

Christmas day is one of the busiest days of the year for lifeguards, ready for people who may be unfamiliar with local surf conditions or may have had too much to drink the night before.

"Often people had a bit too much to drink the night before. We end up doing quite a lot of rescues. Last year we did around 70 rescues on Christmas day and that's a mixture between tourists that haven't been on our beach in the past and don't know the conditions and also locals that just don't understand their limitations at times." said Captain of North Bondi surf life saving club, Doron Milner.

Across the pond in Florida 837 Santa suit-wearing surfers hit the waves for a good cause in Cocoa Beach.

Surfers were attempting to break the Guinness World Record for most surfers on one wave, unfortunately, waves this year were a bit too small.

And instead of dashing through the snow, on the outskirts of Washington D.C, Santa and his elves donned water skis to zip down the Potomac river in an annual tradition that dates back to 1986.

An accompanying cast of characters that included the green-faced Grinch, did back flips in the freezing waters and flung handfuls of candy into the crowd, drawing "oohs" and "aahs" from adults and children alike.