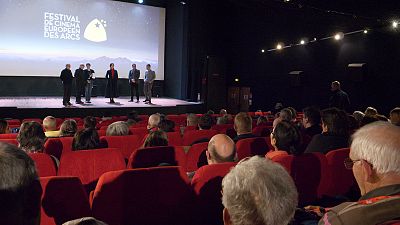 The European Film Festival of Les Arcs has established itself as a leading platform for emerging cinema talent in Europe. For this 9th edition, crowds get to discover 120 films from all over Europe at screenings in the famous French ski resort.

But while some come to Les Arcs to see the films, many go to seek partnerships for future projects at the co-production market – a major part of the festival.

German producer Jamila Wenske, whose film ‘Freedom’ is being screened as part of this edition’s German Film Focus, has come to seek co-funding for her next project.

“Les Arcs is famous for giving upcoming projects really like a quality brand, it helps you as a producer and as a director to define your project at a European level because you meet here all the EU producers, financiers even, TV station representatives, it’s like a little melting pot.“
Jamila Wenske, film producer

Among the jury this year is Hungarian director Laszlo Nemes. His debut feature ‘Son of Saul’ was born here and went on to win multiple awards including an Oscar. (Watch our exclusive interview with Laszlo Nemes here)

“I have a history going way back to 2011, I think, when my first film project that would later become ‘Son of Saul’ was present here at the co-production market of the festival. They really selected it because they saw a potential in it, very few professionals really believed in it, so I thought I had to come back.“
Laszlo Nemes, film director

The jury will have to pick a winner among ten films selected in the official competition. Among them is Italian director Susanna Nicchiarelli’s latest movie, ‘Nico 1988’.

“Nico, after having been the most beautiful woman in the world, an icon, a model, after having sung with the Velvet Underground, she became an author, and her own music was a very precious contribution to the history of music. In the Seventies and the Eighties she did some great records that influenced a lot of the music that came after: the gothic movement, the new wave movement. She was a very brave musician.“
Susanna Nicchiarelli, film director

“You know, the problem we have in the UK particularly is that you can’t take any risks anymore because no one will finance your film unless there’s someone very famous in it. The only way you can take risks in the UK is by making a very low budget film which means that production value is limited. And I think it’s because the finance people are scared they won’t make a profit if there isn’t Jenifer Lawrence in the main role.“
Gemma Arterton, actress

Relying entirely on improvised dialogue, ‘The Escape’ tells the story of a young stay-at-home mum in soulless suburban England who’s slowly consumed by depression and one day leaves her family. Gemma Arterton opened up about the film in an exclusive interview with Euronews.

The European film festival of Les Arcs runs until December 23.

‘Son of Saul’ director on his Oscar-winning movie

Gemma Arterton opens up about her new film ‘The Escape’