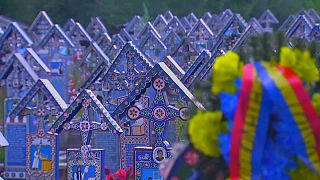 ‘Grave art’ is breathing life into a cemetery in Romania, where visitors are as likely to be found crying tears of laughter as they are tears of sadness.

At the Merry Cemetery in the northwestern village of Sapanta, sombre tombstones are replaced with brightly-coloured Orthodox crosses, decorated with epitaphs and childlike drawings.

The so-called ‘grave art’ describes in a darkly humorous manner the people buried there and the flaws they had in life.

Despite being set in a remote location, some 600 kilometres northwest of the Romanian capital Bucharest, the cemetery has become one of the country’s top tourist attractions.

“I’ve seen what touches (tourists). This cemetery… is not just a cemetery. People realised that this indeed is a place where you can laugh at death itself,” says sculptor Dumitru Pop Tincu, 62, who crafted many of the cemetery’s more than 1,000 crosses.

But while the crosses are brightly coloured and the messages are written in a tongue-in-cheek way, many remain starkly sad.

One features drawings of a young man and a subway carriage. In real life, the man was run over by a train.

His epitaph reads: “I enjoyed life so much, I went to western Europe; may it be cursed along with the Paris metro. I used to be a gambler, and I died in 2001 when I was 16 years old.”

Others act as modern-day mortality tales.

“I used to work to be wealthy and I had to leave everything behind. I wish for people to stop and read this on my cross,” says one.

For many in the remote region, this is a small price to pay to continue to bring laughter beyond the grave.