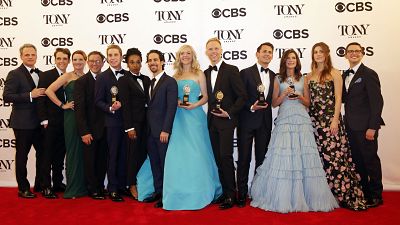 Ben Platt, a 23-year-old newcomer, was named best actor in a musical for his title role. Rachel Bay Jones won best featured actress, and several times the show’s stars and writers were called up onto the stage as the show also took best book, score and orchestrations.

Already award-winners for writing “La La Land”, composer-lyricists Benj Pasek and Justin Paul were winners again for this latest musical. “Evan Hansen’s” success comes amid what many regard as a particularly rich musical season on Broadway.

Unlike twelve months ago when “Hamilton” almost swept the board, this year’s Tonys were more even-handed.

As widely predicted, Bette Midler won her first competitive Tony as best actress in a musical for “Hello, Dolly!”. The musical won four Tony awards in all.

“Oslo”, a behind-the-scenes look at the 1993 Middle East peace accords, won best play, in which Michael Aronov took the featured actor award for his role as an Israeli negotiator.

After a year away, the Tony Awards returned to their traditional venue at Radio City Music Hall in New York.