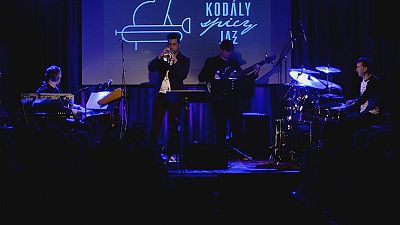 The world of funk and jazz – with a twist. It is the music of one of Hungary’s most famous composers, Zoltán Kodály.

He marked the musical scene of the 20th century by rediscovering traditional, folk songs and using their elements in classical music.

2017 is a commemorative Kodály year, and marks the 50th anniversary of his death. And Kodaly Spicy Jazz are putting a new spin on his music.

“We feel young people tend to forget folk songs. They recognise them, but don’t know they are traditional songs. That’s why we try to rearrange them in styles with which young people are familiar,” explained trumpet player Dániel Görögh.

At their debut concert the band played some of Kodály’s original songs including the well known ‘Advent Song’. The audience could compare it immediately with its contemporary version.

“The songs collected by Kodály can be recognised immediately after several notes. We have hidden some tunes, but at the end of the song everybody can realise that he knows it, from the choir or from the good old times,” opined Zoltán Cséry, pianist-producer.

The members of the project play in several Hungarian bands in various styles, from rock to blues from swing to rap.

The composer is known worldwide as the creator of the Kodály Method, a way to teach children to love and play music.

Now the band will be taking their arrangements of Kodály’s music further afield and will perform in Stuttgart in May and in Rome in September. Their three songs are available online.