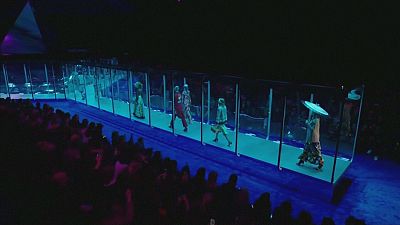 After New York and London, for the next six days Milano Moda Donna rules the world of female fashion, with a host of glittering shows in the Italian fashion capital.

Gucci’s enchanted garden went down a storm on Wednesday as the fashion house let its hair down. It is French luxury giant Kering’s biggest brand and decided to kick off the extravaganza with clothes featuring flowers, insects, animals and symbols, with models walking on an elevated glass runway surrounding a silver pyramid.

Outfits by Alessandro Michele, creative director since January 2015, says he was inspired by an “alchemist’s garden, a magical place…where apparent contradictions live together”.

The show started more classic Gucci, but that was soon eclipsed by models disappearing under wide parasols, carrying arrows, wearing glitter leggings, in long ruffled and flowered dresses, with heads covered in balaclavas. For men it was shorts and embroidered capes as well as couple done up as farmers and maids.

Michele, who has been able to relaunch the brand giving it a new strong identity and a vintage, geeky yet chic look, dwells on the “complexity of existence and on its ambivalence and dualisms” in the show notes.

Fay, part of Italian luxury group Tod’s, went for masculine looks, inspired by the fashion of the 1990s.

The collection heavily featured tartans, Prince of Wales check tweeds, angora wool and cashmere in the neutral tones of black, grey, blue and white with splashes of yellow and burgundy.

The group, known for its signature field coats, brought out duffle coats, interpreted in various lengths and materials, adorned with furs and high collars and decorated with leather.

The brand’s designers took inspiration from the French and Italian fashion of the 1990s, according to Tommaso Aquilani, one of the brand’s two creative directors since 2010.