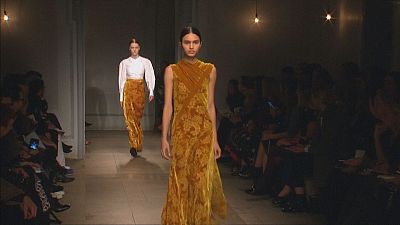 It was “See now, buy now” from Burberry at London Fashion Week. Fashionistas could buy what caught their fancy straight off the runway rather than wait the traditional six months for the clothes to hit the stores.

British artist Henry Moore was the inspiration for the label’s latest collection with models strutting amid his sculptures in neutral designs influenced by his work.

Moore, who died in 1986, was known for his bronze sculptures, some of which were on display at the venue.

Men’s shirts also had lace detailing while trousers were high-waisted. A selection of jackets and Burberry’s famed trench coats came in sculpted shapes.

The Erdem show at the Old Selfridges Hotel showed a remarkable unity of vision.

Instead of exposing wide swaths of his models’ flesh, as other designers are doing, he chose to emphasize the female form in its entirety, only rarely choosing to unveil a hint of cleavage.

Most of the outfits featured high necks and long sleeves with elaborate detailing, intricate bead work and delicate embroidery.

Oversize coats or high boots seemed to explode with colour. The beauty was in the detailing, which gave each piece an individual feel.

Some were sparkly, some were subtle and subdued. Despite their differences, the pieces complemented each other, making the entire collection come alive.

Known for his use of experimental textiles, energetic prints, and intricate craftsmanship, the show marked a return to London Fashion Week for the designer.