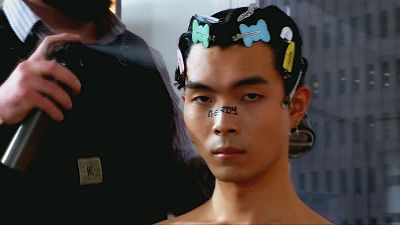 There seems to be no escape from the growing resentment to the presidency of Donald J. Trump.

His clothing is made from bamboo fabrics and other bio-degradable materials.

Italian designer David Naman continued with his themes of sophistication, individuality and style.

Jon McKinney is the director of the global brand development of David Naman:“We had this love of that 70’s mod, kind of feel. – especially today, when everybody is too cautious and everybody’s so just uncertain, we wanted it to be a little more fun. “

The Rafal Swaider ethos from his own website is “the unique tailoring is not about formality, instead the subtle details of cut, shape and form: “this season we were mixing elements of British punk with the romantic side of Paris. The idea was to create a street gang of peace fighters. With everything that’s going on in the world I think it’s really important to stand up for our rights and what we believe in. So hopefully this collection stand for that,” said the designer.

British brand Wood House covers the spectrum of contemporary fashion from the conservative to the futuristic.

Nin Truong is from the house:“So the collection is, there is a lot of warmth and it’s called ‘Traces of Warm Light.’ And the whole idea is that there are these traces of bright lights within the collection but with a sense of warmth..”

‘Private Policy’ is a brand for the young and
rebellious on a mission to break the restrictions embedded in fashion.