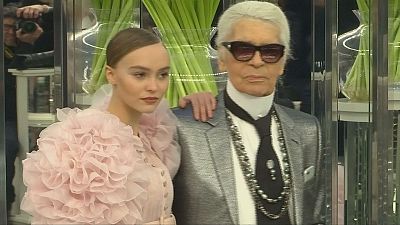 There was a sparkle in the City of Light. After menswear’s fashion week, it was time for the Haute Couture in Paris as Chanel showcased its Spring/Summer 2017 collection.

From its reflective runway to its mirrored pillars topped with white lilies, Paris’s fashion pack could see themselves and designer Karl Lagerfeld’s creations from all angles.

Everywhere the collection sparkled. A sequined silver cocktail dress with touches of purple and pink, belted below the bust, melted into a pink feather skirt dusted with metallic leaves.

Model and Chanel muse Lily-Rose Depp, closed the show in a dusky pink gown and did a lap of honour with Lagerfeld.

Amid a lush garden setting at the French capital’s Rodin museum, models opened the show in Dior’s signature Bar jackets in black, re-invented into capes with hoods and worn with lace tops, pleated skirts and wide-leg ankle-length culotte trousers.

Chiuri also presented a selection of white dresses before moving onto dream-like frocks in pink, mauve, grey and blue for the evening.

The signature “lobster dress’‘ – influenced by Dali – was revisited with inserts alongside menswear jacket silhouettes.

Popstar Kylie Minogue and actress Thandie Newton were front row for the couture feast which was held in the old Place Vendome atelier-apartment of fashion icon Elsa, who died in 1973.

The Giambattista Valli show held in France’s National Archive was an ode to women who travel, wander and who seek adventure.

Cocktail dresses in satin duchesse silk that had surprising folds, as though they had just come out of a suitcase, which was exactly what Valli had in mind opened the show.

Flowers were a major theme, as they always are in Valli’s shows. He wanted to make dresses that felt like a promenade in a Mughal garden, so evocative in their colours and exuberance you could actually smell the fruit and flowers.