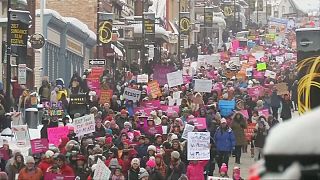 The Sundance Film Festival is in full swing but at the venue in Park City, Utah the Women’s March filled Main Street as Trump’s inauguration was in everybody’s minds at the weekend.

The world of showbiz has for the most part been less than enthusiastic in their support for the 45th President. of the US.

“We have to have empathy and compassion. We’re gonna become a nation that’s so cut off from the rest of the world if we allow him to continue the way he wants to, the way he talks. And I just can’t – there’s a part of me that will fight until the bitter end to not have that happen,” explained actress Charlize Theron.

“We are going to unite and find everything that we can find in common with other people that disagree with us and who are different from us. We’ve got to work together and this country is about love, not hate,” said the march organiser Chelsea Handler.

“We live in a reality TV society. And I think people connected with our new president because it felt normal to them because reality TV is this completely insane, sort of made up world becomes normalized to people.”

Actor Jason Segel added: “It’s going to be a scary awakening when you realise this reality show is interactive and he can take your health care.”

Kristen Stewart listening to Chelsea Handler: This isn't 1917, it's 2017. We shouldn't have to be fighting for progress. #marchonmainpic.twitter.com/l6NfbcJQDP