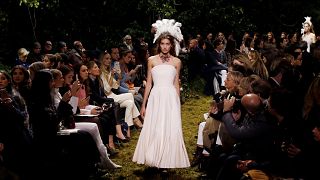 With a fantasy theme, the styles were inspired by nature and fairytale.

Chiuri, who took over from Raf Simons last year, described her efforts to maintain a “wearable” element to her designs.

“It’s important to give a dream but a real dream, something for every day,” she noted.

“She brought the idea of a woman and a woman who understands the women of today, younger women,” said Dior CEO Sidney Toledano.