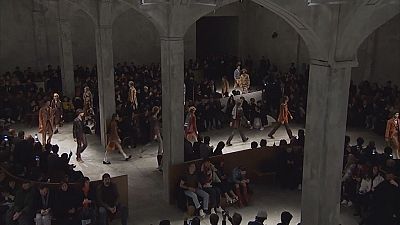 It was the 1970’s at the Milan fashion show. The decade was the inspiration for Muccia Prada and her new collection. The Italian luxury brand has always something complex to say about the state of the world through fashion.

The designer is a self-proclaimed “leftist feminist”, a former Communist party member and mime artist. For her the 70’s was an important time for protest, for humanity.

So the corduroy leisure suit with big pockets, the soft cashmere sweaters with fuzzy reproductions of landscapes, the furry shoes sticking out from the cuffed bell bottom pants are all her expressions of normality.

It is her protest against excess, the need we seem to have for everything to be big.

The collection showed knits with sharp, geometric lines reminiscent of the Tokyo skyline. The designer included know-how of Japan’s enduring craftsmanship including Shibori a Japanese dyeing technique from the 8th century.

It is Missoni’s twentieth anniversary as a creative director at the family firm which was founded by her parents in 1953 when they started a small knitwear workshop in the Lombardy region.

The collection showed joyful colours, the melting patterns and the general sense of wearable art all felt quintessentially Missoni.