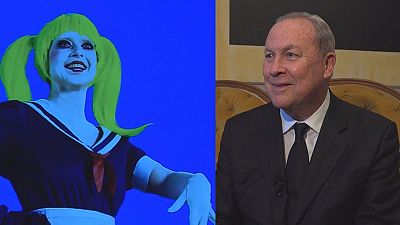 Robert Wilson is honouring two of Europe’s most important art collectors. Giuseppe Panza and wife Rosa began collecting in the 1950s, and now the American visual artist and theatre director has filled their old home with video portraits of celebrities like Brad Pitt, Lady Gaga and Isabella Rosselini and fusing his art installation with the surroundings and the furniture of the 18th-century villa in Varese, north of Milan, where many pieces of the famous art collection still reside.

“The light is very important, Einstein said that light is the measure of all things, so we spent long hours lighting the works and without light there is no space,” says Wilson.

The exhibition “Robert Wilson for Villa Panza. Tales” is organised by Fondo Ambiente Italiano, (FAI), the National Trust of Italy. This private non-profit organisation protects elements of Italy’s physical heritage and is also in charge of the Villa Panza – The work of Wilson and the scenography gracing the famous villa can be seen at the 18th-century Villa Menafoglio Litta Panza at Varese outside Milan until October 2017