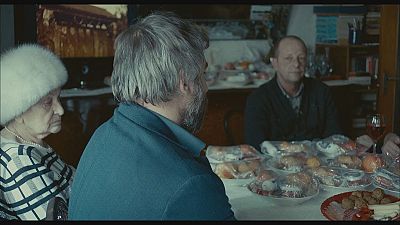 Following on the heels of ‘The Death of Mr Lazarescu’ and ‘Aurora,’ Romanian filmmaker
Christi Puiu’s latest offering is ‘“Sieranevada’”: its a dark comedy focusing on a family reunion.

A funeral forces a large family to gather in a Bucharest apartment.

Secrets are revealed and emotions come to the fore.

The director takes up the story:“The starting point of the film was the commemoration of my father’s death. After the funeral, this was this dinner and we talked about a lots of things, mainly politics, but not about him, the departed one. So I found this to be quite absurd and comic, and sad. I said to myself, some years later that I have to make a film out of it.”

What marks a Puiu film is his dissection of everyday Romanian life.

‘Sieranevada’, awarded Best Feature and Best Director at the Chicago Intl. Film Festival, is selected as the Romanian entry for the Best Foreign Language Film at the 89th Academy Awards.