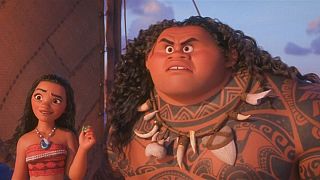 “Moana” is Disney’s latest 3D animation film, a “mythic adventure set around 2000 years ago and across a series of islands in the South Pacific”. Spirited teenager Moana embarks on a quest across the ocean to save her people. Maui, the legendary tatoo-covered demigod goes with Moana on her adventurous journey

He is voiced by Dwayne Johnson, “The Rock’, the erstwhile wrestler now Hollywood’s highest-paid leading man. He is half-Samoan himself, with Polynesian origins, so expect him to be close to the story.

“The folklore of Maui is something that lives within our Polynesian culture, so as we grow up we hear these stories from our grandmothers and aunties of Maui, the great Maui, the demigod Maui. So he lives within our history,” he says.

Disney top directors Ron Clements and John Musker were tasked in 2012, on research trips to Fiji, Samoa, and Tahiti, to meet the South Pacific’s peoples and learn about their culture to give the movie authenticity. Over the five years it took to develop and produce the film, Clements and Musker recruited regional experts to form an Oceanic Story Trust, It advised on the film’s cultural accuracy and sensitivity as its story evolved through nine different versions

15 Fascinating Facts About the Making of #Disney's #Moanahttps://t.co/4VKcdD3Fmh#MoanaEvent

The title role is played by American singer and actress Auli’l Cravalho who was born in Oahu, Hawaii,

“The filmmakers are inspired and whenever they are inspired to make another Moana I will be fully behind them but I am so excited for this journey and I am excited for people to see it come on screens”, she said.

Any lover of film and the process that goes into it, will love this behind the scenes look at #Moana! https://t.co/Dvngacjmnx

Dwayne Johnson says Polynesian culture abounds in interesting ironies and juxtapositions, and only a casual reading of it does not do it justice.

“It’s a very tough culture, just tough, there are tough men, tougher women but beautiful and warm and caring, it’s such a great mix,” he says. “So I think people will be really pleasantly surprised and in a way it’s kind of like a masterclass, if you will, of Polynesian culture and storytelling.”

Johnson is perfect for the voiceover role, and with a host of other projects on the boil and a recently-professed interest in capitalising on his public image to run for office, (he’s a registered Republican), The Rock may one day be more than just a movie star.