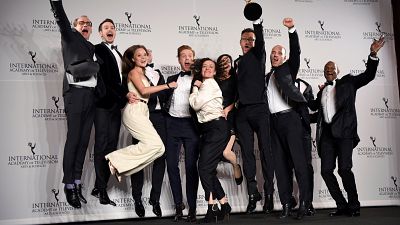 The 44th International Emmy Awards have taken place in New York, and this time the big winners of the night were German and British television programmes with three Emmys each.

While Dustin Hoffman could not make it for his best actor award for the BBC’s “Esio Trot”, a Roald Dahl adaptation, German actress Christiane Paul was not going to miss the occasion.

Her Emmy is for the portrayal of judge and single mother in the German TV series “Under the Radar”. The 42 year-old actress was delighted, as is the German TV industry, which has been increasingly investing in high-end television production and is now starting to reap the critical and commercial rewards.

Under the Radar is a tense, hard-hitting political thriller about a woman whose life is turned upside down when her daughter is suspected of planning a bomb attack in Berlin.

The gripping Cold War drama stars Jonas Nay as a young East German soldier pressured into being an undercover spy in the West to get medical treatment for his sick mother.

British TV series “Hoff the Record” scored the best comedy prize, the latest vehicle for the particular talents of one David Hasselhoff, a mockumentary-style look at how an ageing star adapts to a career relaunch in another country.

“Thank your very much. 2016, what a year ! Brexit, Donald Trump and now David Hasselhoff,” exclaimed producer Krishnendu Majumdar on receiving the award.

Hasselhoff plays the culture shock card for maximum laughs as he sends himself up in “Hoff the Record”, relocating to the UK in the search for a paying gig.

Below is the complete list of International Emmy winners:

BESTPERFORMANCE BY AN ACTRESS
Christiane Paul in Under the Radar (Germany)