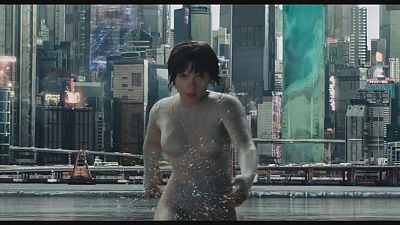 Scarlett Johansson has unveiled the much anticipated trailer of her new movie ‘Ghost in the Shell’ in Tokyo.

When you play a character that is some step removed from human and you don't have the nuance and the tools of those little things that make us human, it's just a very challenging experience because there's so much going on inside (that's) impossible to reflect completely outside.

The film is based on the internationally-acclaimed Japanese manga of the same name by Masamune Shirow. Johansson stars as The Major, the half-human, half-cyborg leader of an elite task force charged with hunting down the most dangerous criminals and extremists.

“I think this film for me is really – even though it’s set in this explosive world that’s just extraordinary and so visually stunning and so action-packed – it’s really, to me, a coming-of-age story and a story about the loss of innocence and then also the kind of rebirth that you can have from that,” said Johansson.

While excitement for the movie is building up, the casting of Johansson in the lead role instead of an Asian actress has caused major controversy, leading to accusations of whitewashing.

Director Rupert Sanders responded saying she was the best actress of her generation and did an incredible job of nuancing the human evolving through the machine.

It was a performance Johansson described as a real challenge: “When you play a character that is some step removed from human and you don’t have the nuance and the tools of those little things that make us human, it’s just a very challenging experience because there’s so much going on inside but what’s going on inside, it’s impossible to reflect completely outside,” she said.

The film has been in the making since Steven Spielberg acquired the rights back in 2008. Featuring stunning visuals, the trailer has already been viewed more than 8 million times on YouTube, and expectations are high among fans of the cult 1995 animated film, whose director Mamoru Oshii has approved of the 2017 movie.