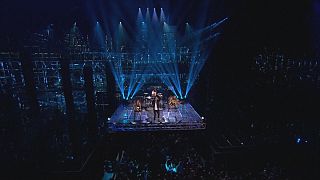 Bruno Mars had the Rotterdam audience on its feet and dancing when he opened this year’s MTV Europe Music Awards in Rotterdam with his single ’24k Magic’, the follow-up to his 2014 hit ‘Uptown Funk’.

Canadian heartthrob Justin Bieber did not turn up to collect his prizes for Best Song (‘Sorry’), Biggest Fans, and Best Canadian Act. Nor was Lady Gaga there to collect her two gongs, for Best Female and Best Look. Her wins make her the most awarded artist in the history of the MTVEMAs.

Canada’s was again represented by Shawn Mendes, who won in the Best Male category. Collecting his award, he wowed his teenage fans with an accoustic version of his hit ballad ‘Mercy’.

MTV’s Global Icon award – for career achievement – went to US band Green Day. Speaking as he went up to collect the prize, lead singer Billy Joe Armstrong introduced a political note, saying: “It’s nice to be out of America just for a second because of this horrendous election that’s going on right now… our entire country is about to have one big collective heart attack.”

The band closed the show with a performance of their 2004 hit ‘American Idiot’, which they dedicated to Donald Trump.