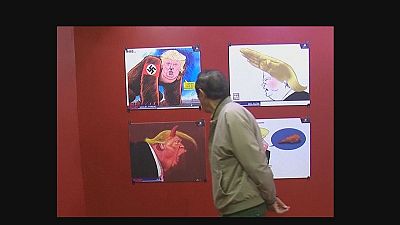 After perhaps the most unedifying US presidential campaign in history at least someone is having a laugh.

Mexico has not spurned the opportunity to mock the Trump for his less than flattering comments about Mexicans.

Lest we forget he said Mexico sends ‘rapists’ and ‘drug runners’ to the US.

The pen is mightier than the Trump and a thousand cartoonists sent in caricatures of the candidate with the mad hair.

The show is now on at Caricature Museum in Mexico City.

An American sportswriter walks into a caricature museum in Mexico City, and Donald Trump is everywhere: https://t.co/gcXiNPokmV

Arturo Kemch is the curator:
“I think Mexican caricaturists were the ones who felt most offended, so they decided to go hard down the path of creativity. I think other Latin Americans were offended too on a lesser level, for logical reasons, and they also responded. This all has come from Trump’s behaviour and speeches, and the way in which he has offended us throughout his campaign. This gave us the structure for everything we can see here in this exhibition.”

Sixty cartoons of Trump grace the walls of the exhibition.

One visitor put the thoughts of a nation in a phrase:” “These posters express the feeling of the Mexican people with regards to that negative man who has offended and humiliated us so much.”

The works are both funny and indignant:“This is what the caricatures are here for, so that we can laugh about something which may affect us, but we should also see it from the other side as something fun, that it is not so bad and we shouldn’t be afraid,” said another visitor to the show.

Due to the exhibition’s popularity it will run beyond US election day and into 2017.