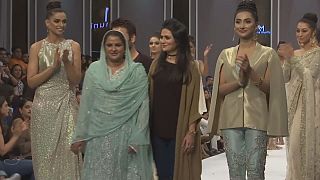 <p>As well as the glitz and glamour of labels such as Saira Rizwan and the design duo Deepak n Fahad, Pakistan Fashion Week took a stand for women’s rights.</p> <p>Fashionista Rozina Munib invited <a href="https://en.wikipedia.org/wiki/Mukht%C4%81r_M%C4%81'%C4%AB">Mukhtaran Mai</a> onto the runway.</p> <p><a href="https://www.youtube.com/watch?v=59ssmLB1_XE">Mai</a> was gang raped in rural Pakistan in 2002, a punishment delivered by a local council. She was then paraded round the village in a ‘walk of shame.’ </p> <blockquote class="twitter-tweet"tw-align-center data-lang="en-gb"><p lang="en" dir="ltr"><a href="https://twitter.com/hashtag/PFW2016?src=hash">#PFW2016</a> Thanku all media & fashion industry for praising my efforts <a href="https://t.co/6Fwp074IaX">pic.twitter.com/6Fwp074IaX</a></p>— Mukhtar Mai (@MukhtarMai) <a href="https://twitter.com/MukhtarMai/status/793849091319013378">2 November 2016</a></blockquote> <script async src="//platform.twitter.com/widgets.js" charset="utf-8"></script> <p>Her crime, defending her brother from arrest.</p> <blockquote class="twitter-tweet"tw-align-center data-lang="en-gb"><p lang="en" dir="ltr">Various of models, including the legend Mukhtaran Mai, showcasing collection by designer Rozina Munib on 3rd day of <a href="https://twitter.com/hashtag/fpw2016?src=hash">#fpw2016</a> in Karachi. <a href="https://t.co/XlP3GmGwY5">pic.twitter.com/XlP3GmGwY5</a></p>— Pakistan Photos (@PhotosPakistan) <a href="https://twitter.com/PhotosPakistan/status/793505889298907136">1 November 2016</a></blockquote> <script async src="//platform.twitter.com/widgets.js" charset="utf-8"></script> <p>Mai, instead of committing suicide as expected, worked tirelessly for justice. </p> <p>After a number of legal processes the Supreme Court in 2011 acquitted five of the six men accused with one sentenced to life, Mai was branded a liar.</p> <p>That is not the end of matters the case is now under judicial review giving hope to abused women seeking justice in Pakistan.</p> <p>Rozina Munib explained why she wanted Mai on the runway:“I want to let women know that they have the right to justice if they have suffered abuse. They must not hide it or cover up for the people responsible. Instead, they have to expose such people so that they are the ones who are forced to hide their faces. I’m doing this because these problems are extremely prevalent, with such problems unfolding in almost every other household.”</p> <p>Since the dreadful event of 2002 Mai has become a campaigner for women’s rights she started the Mukhtar Mai Women’s Organisation and documented her experiences her the book ‘In the Name of Honour.’ </p> <p>She spoke about her battle: <br /> “Before, people used to say that women do not raise their voices. But now, as you can see, women do raise their voices, they fight for their rights. I want to be the voice of those women who face circumstances similar to what I went through. That’s why I say that whatever step I take, I do it for those women; because nothing can change what happened to me but I can at least fight on behalf of future generations.”</p>