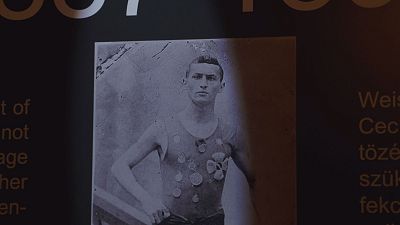 One cannot escape the fact that 90 years after his death Harry Houdini is still the world’s most revered break out artist.

still lauded 90 years after his death, is such a beautiful and complete story

Born Erik Weisz in 1874 in Budapest he made a name for himself in vaudeville, before taunting police forces to chain him up.

Harry Houdini gave what would be his final performance 90 years ago today, in Detroit, performing with a high fever. He died a week later. pic.twitter.com/5YHUDL83gV

A museum to celebrate the escapologist has opened in the city of his birth.

The House of Houdini is is fitting tribute to the ‘The King of Handcuffs.’

David Merlini is the museum’s co-founder:
“There are a lot of crazy people like me in the auctions where I buy these handcuffs, who offer an astronomical amount of money for an item. The impact of his career on the history of magic as well as on the culture of the world is so unique.”

The family migrated to the USA (Appleton, Wisconsin) when Erik was four years old. Leaving home at the age of age of 12, He arrived in New York a began working in a tie factory.

His first brush with magic came when he read the autobiography of Jean Eugene Robert-Houdin.

From then on Harry Houdini developed his act and cemented his fame.

David Merlini continues:“Everyone is a bit like Houdini in the bottom of their souls. Everybody would like to escape from certain situations. Some are brave enough to do that, others are less daring. But the story of a little man, who comes from the depths, from far away and conquers the whole world, and is still lauded 90 years after his death, is such a beautiful and complete story, that it inspires a lot of people.”

Welcome to ‘The House of Houdini’ make sure you lock the door on your way out.