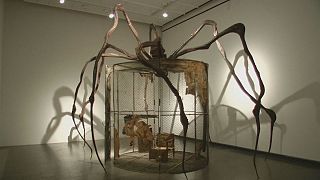 Visitors to the Louisiana Museum of Modern Art near Copenhagen are being invited to take a trip inside the mind of Louise Bourgeois.

With the "cells", she could really compose a three-dimensional spatial architectural piece where she could preserve a certain story and mood and temper, regardless of what context the works could be placed in.

The exhibit features a number of installations which Bourgeois called ‘cells’, playing on all the meanings of the word – from prison cells to monk’s cells to the smallest biological units of the body. Each work is an independent spatial unit filled with carefully arranged objects which create different scenarios

Drawing together 25 of the 62 cells Bourgeois created, the exhibit begins with some of her earliest attempts.

Cells I-VI were created for the Carnegie International exhibit in Pittsburgh in 1991.

“We have perfume bottles for the sensation of smell, we have an ear for hearing, so (we have) all the different senses and their relation to memory. Also, their relation to different kinds of pain, which is also the subject in these first cells. And then, they’re all pretty small. So they’re also about really small, claustrophobic spaces and that’s the kind of space she preferred,” says Tine Colstrup.

‘The Last Climb’, featuring a spiral staircase leading up through the roof to nowhere, was her last ‘cell’ sculpture.

Considered one of the most important female artists of the 20th century, Bourgeois worked right up until she died at the age of 98 in 2010.

‘Louise Bourgeois. The Structure of Existence: The Cells’ runs at the Louisiana Museum of Modern Art in Humlebæk near Copenhagen runs until February 26.