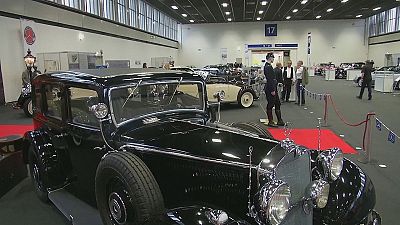 For some people, they are just cars from the past. But classic cars represent an important market segment for investors.

You see the difference with vehicles produced today when you look at the passion for detail. Many were made in small numbers, not mass produced like today. Sometimes, there were only a few or a few hundred models made.

With the value of rare classic cars rising by more than 500 per cent in the past decade, the Motorworld Classics fair in Berlin was a good chance for anyone interested in that kind of investment.

For others, however, a classic car remains a very emotional purchase.

“You see the difference with vehicles produced today when you look at the passion for detail,” says Andreas Duenkel, head of the fair. “Many were made in small numbers, not mass produced like today. Sometimes, there were only a few or a few hundred models made. And when you look inside the engine, you realise how much love and commitment the mechanics and manufacturers put into the vehicles.”

Asked whether it’s still worth investing in such cars, classic car dealer Dietrich Gross says: “It depends on the market segment. The high-end classic cars are still selling very well. They are rare and therefore very expensive and in general they are purchased by very rich people, who will always have money. They buy them out of love, and sometimes as an investment. There is always a market for this type of car. It is harder with cars that are in bad shape or that are not that rare. For those cars the market is sluggish.”

Another star of this year’s fair was a Cadillac Eldorado from 1967. It is not a very rare car, nor is it in a good state. But it was once owned by Elvis Presley, which bumps up the price tag to about half a million euros.

“This is special because the previous owner was a very famous singer, Elvis Presley. That is what makes this car interesting. A normal Eldorado would obviously not be as sought after as this one,” says Oliver Schneider, owner of the classic car dealership that has the car listed for sale.

For anyone who might be interested, the Eldorado comes with the original papers said to prove that Elvis bought it back in 1967, as well as a bullet hole where the King of Rock’n‘Roll is said to have shot it after it refused to start.