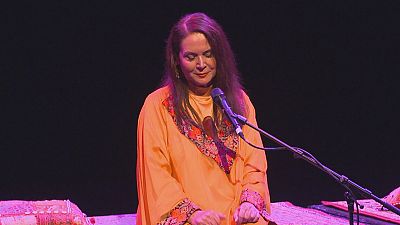 <p>One of Iran’s most revered classical singers, <a href="http://parissamusic.org/05_biography/biography.htm">Parissa</a>, recently performed at <a href="https://www.barbican.org.uk/music/event-detail.asp?ID=19558">London’s Barbican</a>, which was celebrating the anniversary of the birth of iconic <a href="https://en.wikipedia.org/wiki/Rumi">Persian poet Rumi</a>. </p> <p>A star in the male-dominated world of <a href="https://en.wikipedia.org/wiki/Persian_traditional_music">Iranian classical music</a>, Parissa had to give up her passion following the Iranian revolution, when <a href="http://www.euronews.com/2016/03/25/no-land-s-song-when-art-triumphs-over-ignorance-in-iran">women were no longer allowed to perform solo</a> in public. Though the policy has been softened, Parissa says she won’t perform in public in Iran. </p> <p>“Women can sing in Iran but only for a female audience. I have never given such a performance, because I do not believe that a female singer should only sing for women. This genre of music has nothing to do with gender. It’s about spirituality,” she explains. </p> <p>Like most of her music, her recent concert was a collection of interpretations of Rumi’s poems. She says the 13th century scholar, who had a huge impact on Islamic culture and Sufi music, is a great source of inspiration for her: “Just like himself, Rumi’s poems are eternal. Seven centuries after his death, his universal message still applies. Iranian classical music, which is closely linked to Iranian classical poetry, carries the same message.”</p> <p>Despite the ban on singing, Parissa did not leave Iran but instead kept a low profile. She has turned her house into a singing school for women, who would otherwise find it very hard to learn Persian music. Occasionally, she goes on tour outside Iran.</p> <p>According to Iranian writer Masoud Behnoud, “although Parissa has not been performing on stage, we have been living with her voice for forty years. In my opinion, her voice has not changed much and she is still the heavenly angel of Iranian music.”</p> <p>In Iran, <a href="https://www.theguardian.com/world/iran-blog/2014/aug/29/women-singing-islamic-republic-iran">women singers are finding ways round the ban</a>, with on-stage lyrics and humming redefining exactly what “solo” means. The ban has also lead to the spread of a practice known as “co-singing”, where a woman sings together with other men and women to mask her own voice.</p>