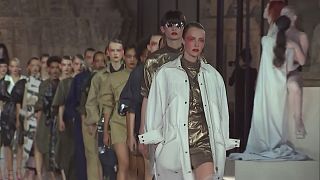 It was a most unconventional backdrop that Carol Lim and Humberto Leon chose for their Kenzo show at Paris Fashion Week.

Models of all shapes and sizes posed as nude statues at the Cité de l’Architecture et du Patrimoine, the Paris museum dedicated to the history of architecture.

Belgian singer-songwriter Stromae, who has launched his own clothing line with designer wife Coralie, was impressed: “Really nice. Really difficult performance for them. And it’s a really good idea. I love original ideas like this, so – I love that.”

The collection itself harked back to the 1970’s disco years. To capture the spirit forty years later, the designers used the work of photographer Antonio Lopez, who documented the fashion, music and party scenes in New York and Paris in the Seventies. There were airy ponchos, taffeta dresses, high waist trousers and blouses with voluminous shoulders for this definitively retro collection.

Italian designer Giambattista Valli showed his new offering at the Grand Palais. It was an ultra-feminine, lingerie-inspired collection, featuring delicate lace in ivory or ebony, often in the form of dainty bras worn under coats, visible under floral dresses or worn alone as tops .

Often referred to as the Chanel of Taiwan, the brand’s founder Wang Chen Tsai-Hsia describes her style as “neo-Chinese chic”.

In this collection she said was inspired by Barcelona’s Sagrada Familia cathedral, the designer combined elements reminiscent of its architecture by creating garments with long lines, mixing silks, 3D print jacquard and structural mesh. The looks were completed with pointed toe heels and flats in both metallic and snake print.