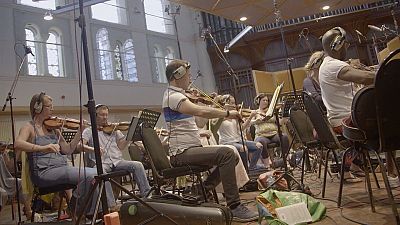 The influential British DJ’s latest undertaking – a show with the Heritage Orchestra performing electronic dance music anthems arranged by conductor Jules Buckley – was so successful, that he’s taking it further, with an album and a UK tour.

“One of my burning desires was that some of these records (Tong’s previous albums) are so special and mean so much to so many people that they should be thought of in the same way as other great records, other great music. And the way house music in particular and a lot of the Ibiza classics affected people’s lives, they’re part of the soundtracks of their lives, just as much as The Beatles or The Stones were for other people and other generations in other times,” explains the legendary DJ.

Fans can expect a euphoric take on Fatboy Slim’s ‘Right Here Right Now’ and an innovative version of Faithless’ ‘Insomnia’ among others.

Pete Tong’s ‘Classic House’ in collaboration with the Heritage Orchestra will be out on November 25, with three UK arena shows scheduled in November and December.

‘Young as the Morning, Old as the Sea’ is British singer-songwriter Passenger’s seventh studio album.

The artist, whose real name is Michael David Rosenberg, says he was inspired by the landscapes of New Zealand and Iceland for this album. He recorded it with his long-time collaborator: “It’s the fourth record I made with Chris Vallejo, who’s one of my best mates and we co-produce. I think with every album we’ve been learning together, we’ve been getting better together and I feel like this one has really come on actually, both with the song choice and the performances but also the production and arrangements as well,” he says.

The album has garnered mixed reviews. While some slammed its formulaic folk jaunts, others have praised its whole new level of maturity. ‘Young As The Morning Old As The Sea’ is out now. Passenger is currently touring with his album.