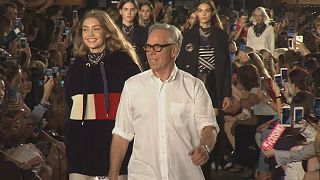 In a bid to boost his brand, the veteran fashion designer has teamed up with top model Gigi Hadid for his new fashion line, the Tommy x Gigi Collection. While the clothes bear Hilfiger’s signature nautical style, Hadid’s influence has lent them feminine silhouettes and sporty, chic details.

As is increasingly the trend, the clothes were available to buy immediately after the show.

Front row at the Alexander Wang show were Madonna and her daughter, Lourdes. Recognised as one of the most talented designers of his generation, the 32-year-old presented a collection described by fashion critics as California chill, featuring an array of bikini tops and cotton blouses, as well as comfortable little skirts and drawstring shorts reminiscent of sleepwear.

As a finale, Wang introduced his new line of apparel and footwear in partnership with sneakers giant Adidas.

And in what’s been described as the most diverse runway of the season, Christian Siriano’s Spring 2017 collection featured women of all sizes, shapes and skin colour.

The outfits included some cheery pops of citrus orange and turquoise in satin, with a dose of ruffles and vegan patent leather for coats and big-bowed heels. Bold stripes, prints, and a polished touch dominated the pieces and a smattering of lacy embellishment and dramatic detail rounded out the collection.