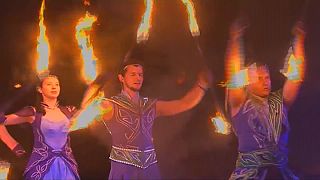 Ratomka, near Minsk, was host to the 2016 International Fire Festival (MIFF) last week.

Cheering crowds and heavy rock music greeted a collection of international guests from as far afield as the US, Costa Rica and France.

Sergei Poritski aka ‘Zerg’ from Ukraine, bowled crowds over with his fearless fire-taming performance. He told reporters about getting into the art form:

“You know, there are people who might be predisposed to this kind of thing. There are some whose first reaction when they are offered the chance to touch fire is fear, and you won’t be able to make them work with it, not for money or glory, or anything else. On the other hand, there are people who, once they get the fire in their hands, instantly show a flash of interest in their eyes and they will never stay away from it.”

“The important thing for us is to have here a fusion of arts – dancing, circus and pyrotechnics. We really like this and it is most important.”

Check out these amazing pictures from the 2016 International Fire Festival being held in Kiev…. https://t.co/xunpAfu9He

Fire-tamers from several countries showcased their most dangerous tricks for almost two hours. They swallowed fire, set their clothes alight, and even inhaled flames.
So-called “fire theatres” from Belarus, Russia and Ukraine were also present.