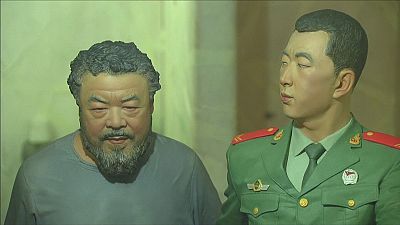 Cuenca, a fortified medieval city in central Spain is hosting an exhibition entitled ‘The Poetry of Freedom’ as part of a nationwide celebration of the 400th anniversary of the death of ‘Don Quixote’ author Miguel de Cervantes.

World renowned Chinese Artist, Architect and Human Rights Activist Ai Weiwei’s latest installation S.A.C.R.E.D forms a central part of the exhibit. It comprises 6 iron boxes with miniature recreations of scenes from his time in prison in 2011 for alleged tax evasion.

The Guardian reported that his arrest was part of a significant government crackdown on Human Rights Activists in which at least 23 others were criminally detained for “creating disturbance(s).”

A global sense of Art

“ He’s really the artist that manages to break all the limits of art and transform it into a form of worldwide communication. The real success of Ai Weiwei’s work is that he is able to transmit it to everyone, and to have a global sense of art as no one has ever done. But also, his art has a message and he is trying to draw attention to issues of human rights, people who are oppressed, to the problems the planet faces”

The miniature models in fibre-glass are made with stunning detail and housed in 6 iron boxes. Visible only through peepholes, the spectators become complicit in the incessant surveillance.

Around the time of his arrest, Weiwei told German TV station ARD:

“There are two surveillance cameras at my gate entrance, my phone is tapped and every message I send on my microblog is censored by them. Obviously I am not free.”

Both Ai and Spain’s most internationally-renowned writer Miguel de Cervantes are figureheads of the exhibition’s theme of freedom. There are parallels with Miguel de Cervantes’ life who was kept in captivity in Algiers by Ottoman pirates between 1575 and 1580.

The exhibition of AI Weiwei’s installation S.A.C.R.E.D, runs in the cloister of Cuenca’s 12th century cathedral in central Spain until Nov. 6.