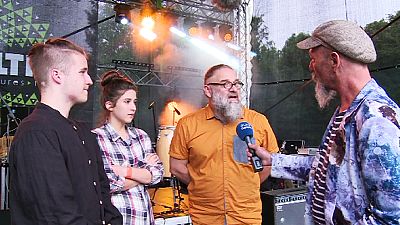 Music runs in the blood of Jan Malisz and his children. Kapela Maliszów is the band he set up, and they’ve been collecting accolades ever since. Their music takes inspiration from traditional tunes from their region in southern Poland. They make original compositions as well as their own instruments in Jan’s workshop.

Euronews met the band at this year’s world culture festival Globaltica in Gydenia, Poland and as Jan explains their repertoire is not only about preserving a traditional sound.

“Of course, we adapt the music, we change the accents, we speed it up. It’s a natural evolution of the music, without breaking with tradition,” Jan told euronews. “We don’t want to put the music in vacuum packed jars and play like our fathers did. We want to play with spirit and energy, especially with the energy and youth which my children bring.”

“It’s not that easy as people would expect (it) to be because we often do different things and as a family we like to argue a lot. So playing together is a challenge but as you could see we could make it.”

On drums and vocals Zuzanna Malisz explains that she began singing at a very young age but never received any formal training. “I sing as I feel it, including pop songs and other songs. I love to sing.”

Jan Malisz’s father, worked as a wedding fiddler in the 1930s and he passed on his music playing skills, as well as his instruments to Jan. That includes a drum called baraban that Zuzanna plays. Her grandfather made the instrument back in the 1950s.

In recent years, folk music has seen a renaissance in Poland, which is keep the band busy, with regular tour dates not only in Poland but all across Europe.