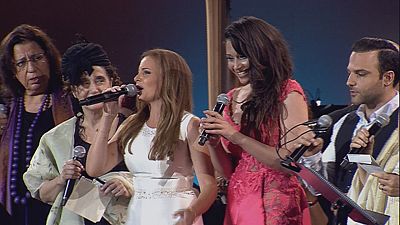 Fifteen international artists from 12 Mediterranean countries have come together to perform at the UN’s offices in Geneva, for the first ever “Mediterranean Concert.”

Music opens the way for dialogue. It does not mean that all musicians in the Mediterranean do the same kind of music, of course, but there are many things that unite us all

Musicians from Egypt, Lebanon, Spain, France, Morocco and Cyprus among them.

They come from a well known-family, rich in artistic heritage.

“For us to be participating in this kind of event is very important because I do feel that culture, specifically around the Mediterranean world, all the area today is not a quiet area, and the only thing that we need to fight (for) is to try to build up bridges, at least to listen to each other,” said oud player Samir Joubran.

The event, organised by the ONUART Foundation aims to foster dialogue and understanding among the different people and cultures of the Mediterranean.

Adnan Joubran added: “We are sharing this Mediterranean sea that is a water, is a fish, is coming and going….(The question is) how can we build up a relationship to love each other, to make a dialogue of cultures?”

Jordanian singer and guitar player Hani Mitwasi has his own original style. He has explored deeply the common language between Arabic and Spanish music.

Born in the Balearic island of Majorca, Spanish singer and songwriter Maria del Mar Bonet has the Mediterranean running through her veins and much of her work reflects it.

She has often looked at the Mediterranean for inspiration – collaborating with other artists of the region.

“Music opens the way for dialogue. It does not mean that all musicians in the Mediterranean do the same kind of music, of course, but there are many things that unite us all,” said Maria.

“Throughout my career I’ve sung with artists from Syria, from Tunisia. I had the chance to work with Turkish musician Zülfü Livaneli. All my life I’ve tried this musical dialogue with all my colleagues from the Mediterranean.”

Moroccan Aicha Redouane enhanced the beauty of mystical Sufi poems with her powerful vocal technique at the concert.

Born in Beirut into an Armenian family, violin virtuoso Ara Malikian, who lives today in Spain, also took to the stage.

He’s assimilated the music of other cultures from the Middle East, to Central Europe, and even Latin America and Spain.

“I think that rhythmically we share many things among us (musicians) in the Mediterranean, for instance the oriental music scales have much in common with the flamenco scales even with traditional Neapolitan, music,” explained Toni Cuenca, a composer and conductor.

“There is a sort of cross-over of melodies and rhythms in the Mediterranean and above all, I think there is the will to connect and understand each other.”

Born in Marrakech into a Moroccan Jewish family, French singer Sapho has blended all kind of sounds in her music from rock to Oriental and Andalusian elements.

This “singer of the world” is also a poet and novel writer.

“I like to sing in different languages, in Arabic, in English in French, etc, and I’ve always tried to work as a ‘translator’ between worlds (cultures) which were separated from each other,” said Sapho at the concert in Geneva.

“I’ve always wanted to help people understand each other’s cultures. It’s always been my obsession through all my career.”

The message of dialogue and understanding was captured in the final song “Southern Wind.” A hymn for peace in the Mediterranean, performed by everyone.

Sapho concluded: “I think arts can bring down barriers and I think artists have a mission: to help people break down the walls.”