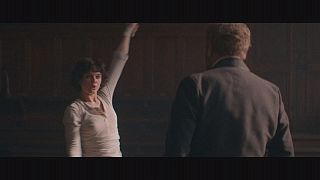 French biographical musical drama ‘The Dancer’ is based on the life of American dancer Loie Fuller who found fame in Paris in the late 1800s.

“I’ve known her (Soko) for seven years and I had noticed her in several films and it was just obvious to cast her,” said Di Giusto.

“I never thought about anyone else – because she’s not only an actress, she’s also an artist, she sings, she does many things and I like the way she gives 100 per cent engagement. She doesn’t cheat.”

Fuller, who was a pioneer of both modern dance, supported other creative performers, such as fellow US-born dancer Isadora Duncan.

Duncan is played in the movie by actress Lily-Rose Depp.

“We’re just so proud of our director because we know how hard she worked on it. She’d been researching and working on this for five years before we even started shooting,” Depp said.

Soko added: “I think, definitely, the movie is about a director too, or it could be about any artist in general.

‘The Dancer’ was screened at the Cannes Film Festival in May and will be on general release from September.