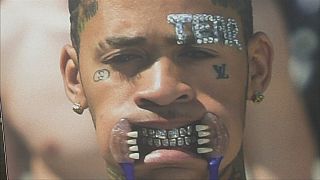 It’s a highly innovativeart Biennale that has just opened in Berlin, even by artistic standards.

Besides the traditional Kunst-Werke Kunst-Werke Institute for Contemporary Art, responsible for organising the biennial since it started in 1996, the venues represent changes in the German capital over the past decade, reflecting the curators’ focus on the paradoxes of our time.

Under the provocative title ‘The Present in Drag’, the event is curated by New York art and fashion collective DIS.

“What we are doing with this Biennale mostly is to amplify the voices of the artists,” says the DIS’ Marco Roso. “And all these artists are talking about subjects very present right now. Berlin is also part of the equation and some of the subjects.”

One installation by London-born artist Simon Fujiwara, entitled ‘Museum of Happiness’, is inspired by a study conducted by his brother, an engineer, on happiness and its economic outcome. ‘DISCREET’ by Austrian artists Armen Avanessian and Alexander Martos is a project in the making to create a new kind of intelligence agency for the people.

“I think what is interesting about the Biennale in general is that it’s not simply critical, it’s not just a platform for reflection, rather it’s very much focused on real transformation, thinking and actions about how to change our reality, how to change our present,” says Avanessian. “And that might only be possible, even if it sounds like a paradox, via the future. Only from a point of view of the future we can have an impact on the present that we live in today.”

The ninth Berlin Biennale runs until September 18 at various locations across the German capital Berlin.