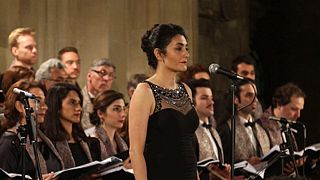 Darya Dadvar is one of Iran’s most accomplished sopranos. The singer, who lives in Paris, recently performed in the French capital with the intercultural Orchestre Philharmonique de Paris-Est.

Darya’s unique style combines traditional Iranian songs with European classics. Her ability to bridge the gap between Iranian music and baroque, jazz or blues has earned her a cross-cultural following.

“I have very strong roots. I have grown up with these Persian songs. When I listen to a European song, it reminds me of a specific Persian song, and it works the other way round too, subconsciously the two merge,” she says.

Darya left Iran for France 25 years ago to study medicine. But soon, her passion for singing took over, and she switched to studying music.

Music is a global language. Darya Dadvar has long proved this by singing in as many as 12 different languages, which probably explains why people from so many different countries attend her concerts.

“Music truly transcends borders. For instance, when I sing in German, the audience enjoys it as much as when I sing in Persian or in French. You soon realise that the language is not just a means of communication, but it translates your feelings. Since my songs come from the heart, they connect with the hearts of the audience. The energy emanating from the audience makes this connection possible,” says the soprano.

Blessed with a powerful soprano voice, Darya started out as a soloist. But she soon opted for a much more challenging career path.

“I decided I didn’t want to be an opera singer who just performs others people’s work,” she explains. “After spending two months as a soloist at the Compiègne opera, I came to the conclusion that I wanted to work on my own. I had something to say and I took the risk, and I really enjoyed it.”

Kucheh, or the Alley, one of the pieces performed at the recent Paris concert, is inspired by a poem by prominent contemporary poet Fereydoon Moshiri.

Renowned Iranian composer, Mehrdad Baran, remembers how he got the idea of composing the music to this poem: “When I realised that the Kucheh poem had great visual potential, I wrote a specific song from each image in the poem. So it didn’t work the other way round, where a composer has a melody in mind to go with a poem.”