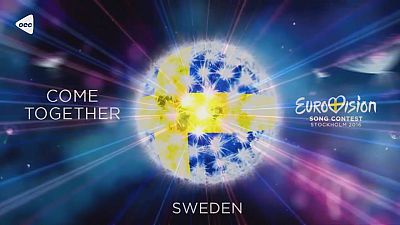 Every Eurovision Song Contest has its own theme.

This year’s host, Sweden, has chosen the Beatles-inspired slogan, ‘Come together’ – to underline the importance of unity in a divided Europe.

The PR company behind the slogan and the logo – a magnetic dandelion – explained what it represents.

“It’s the meeting between people… the magic that happens is symbolised by the power within this flower. It symbolises life,” said Josefin Richards, copywriter at INGO advertising agency.

“The situation in Europe is difficult at the moment. That idea – the discussion around that – was included in the logo,” added Lotta Loosme, Eurovision Communications Manager.

According to Swedish journalist Johar Bendjelloul: “It’s a play on words. It can mean simultaneous orgasm, but that’s not the meaning here, after all it’s a family programme, so it’s about everyone coming together.”

For more than a decade now, Eurovision host countries have chosen a slogan and a logo. Their choices say a lot about the health of the European Union according to some comentators, including Sweden’s Johar Bendjelloul.

“Generally speaking there are two over-arching themes. The first is ‘Look at what a beautiful country we have’, the other is ‘Let’s all come together!’. It is either about national brand building or about unity. And what is quite obvious is that over the last few years there have only been slogans about unity, like ‘We are one’, ‘Join us’, ‘Building bridges’ or this year’s ‘Come together’. And it all coincides with the EU crisis. EU sceptic parties are popping up in Europe and the idea of unity is threatened in an unprecedented way,” he concluded.

The Eurovision song contest will be held on May 14th at the Ericsson Globe arena in Stockholm.