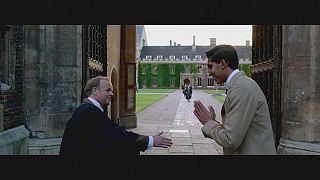 ‘The Man Who Knew Infinity’ is based on the true story of Indian mathematical genius Srinivasa Ramanujan.

An autodidact, he earned admittance to Cambridge University during WWI, where he became a pioneer in mathematical theories.

The film stars ‘Slumdog Millionaire’‘s Dev Patel in the lead role. “It was actually a very triumphant story for me, a very enlightening film and I wanted more people to know about it, because I didn’t know about this incredible man. If I could help breathe life into his legacy, then I was happy to do so and that’s what he did,” says the actor.

Patel’s character faces enormous challenges including racism, rejection and serious illness. While there is no record of Ramanujan speaking, Patel says he was able to base his character on photographs of the mathematician and on his notebooks: “There was no real physical material that we could mimic, there was no found footage or anything of how he spoke. “You know, the cliché says: ‘A picture says a thousand words’, but it really is true.

“We tried to capture the essence of this man and his resilience, that you could see in the pictures, you could read in the book. He was fiercely passionate and that’s something I could really dial into – and I hope we did it justice,” explains Patel.

Described as a plodding, overly dutiful biopic the movie has opened to luke-warm reviews, though critics have praised Patel for making the film live whenever it does.

Also starring Jeremy Irons and Stephen Fry, ‘The Man Who Knew Infinity’ is out from now in the US and in some European countries.