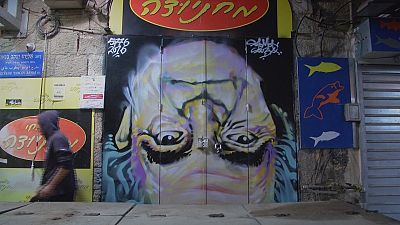 Near-daily unrest is keeping clientele away from Jerusalem’s normally bustling main market, Mahana Yehuda, causing a steep decline in sales at its bars, shops and restaurants.

...people would stop and look and ask, 'Who is this?', and we'd tell them the story and they're touched, they're moved on a whole other level.

But as the market shuts down at night, new faces appear.

A graffiti artist and his partner are painting dazzling portraits, turning the market, or “shuk” in Hebrew, and its drab alleyways, into a portrait gallery.

The project began a year ago as a way to tell the stories of these faces, but it’s also managed to improve the mood of the shuk.

Berel Hahn, project co-founder: “In the beginning when we just started, we didn’t really, it was just colour and we saw it was having a very strong effect on people, it was putting smiles, people were in shock and loving it. Then there were requests for portraits and it led to a handful of characters and then people would stop and look and ask, ‘Who is this?’, and we’d tell them the story and they’re touched, they’re moved on a whole other level.”

The graffiti duo has painted faces of personalities of Jewish and Israeli history, as well as other important and historical figures like Jewish-American reggae singer Matisyahu, Israel’s first prime minister David Ben-Gurion and neurologist Sigmund Freud.

Berel Hahn, Project Co-Founder: “The overall theme is to inspire people to do. These are people who made the world a better place or changed the world, whether a big or small impact they’re heroes and heroines, heroines and heroes from all walks of life, it’s not just Jews and that is one of the universal aspects of our culture, which is trying to better ourselves and overcome our own evil inclinations to be a better person and make our surroundings better.”

The artists take suggestions from shop owners and passersby and draw inspiration from their surroundings in this Biblical city.

Yoav Mizrahi, café manager: “The situation in the market is very difficult. If the status in Jerusalem remains unchanged, we will have a very hard time to overcome it, but I think this graffiti creates a buzz and can definitely help to bring people to the city, so that’s good.”

Ehud Kahana, vendor: “Nice drawings. It really helps to create a positive atmosphere here in the shuk, certainly with all the attacks and the security situation. One big minus with these drawings is that you can only see them at night when the shops close and the doors close. That’s a pity.”

With around 150 shutters in the market painted, and over 200 to go, the artists hope to find a way to have their work on display during the day, to draw visitors when the stalls are open. For now, a great day to experience the art is Saturday, the Jewish day of rest.

Maayan Gur, market-goer: “I think it adds colour, which is a lot of fun. Colour is life. It adds some mood; it adds a feeling of warmth and light.”

Noa, market-goer: “It’s nice. The truth is, it looks cleaner than all the grey there was when it was closed so it’s nice, it improves the mood.”

Berel Hahn: “Art can have a neurological effect on a person, endorphins, oxytocins that make them feel good and people, now that it’s gotten out there and people have been picking up the story, more and more people are coming to visit the shuk because of the art.”

The artists are aware that while the project might not restore the market to its pre-troubled state, art can only ‘do good’ for the people of this beleaguered city.