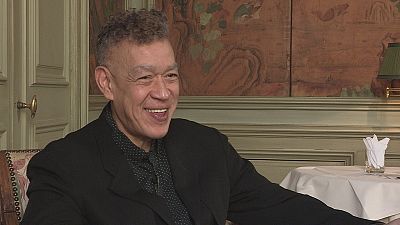 The Collection Lambert in Avignon, France is showing the work of American photographer Andres Serrano.

He is a controversial figure and unique in the world of international photography.

The powerful way his work depicts the modern world, particularly the underbelly of the United States, is considered acutely disturbing, however it is also closely bound up with the history of art.

He spoke to euronews:
“I said I’m not a photographer because I studied at the Brooklyn Museum Art school when I was 17, I studied painting and sculpture. After going to art school for a couple of years I realized I really couldn’t paint or sculpt also I was young and I was moving around and I didn’t have a studio. I was living with a woman who had a camera and I started to take her camera and I used it as an artist. And I realized that as an artist I chose my art practice to be with the use of a camera instead of a paintbrush.”

Serrano has a good relationship with the gallery creator Yvon Lambert and it is not the first time he has exhibited in Avignon.

“Over the course of 20/25 years Yvon and I don’t communicate much, but I know Yvan loves me because
he loves my work and I appreciate him for that.”

The series of photographs ‘The Morgue’ investigates ideas of death and our relationship to it: “I discovered I don’t like it, I don’t want to die. What I discovered about death is that people who die often die in a very unexpected way. And it’s not necessarily the death you envision or you deserve. Most of the people that I photographed in the morgue didn’t die at old age, they died from horrible accidents, from murders, from suicides, and diseases, but very few natural deaths.”

His work ‘America’ is a series of over 100 photographic portraits taken over three years.

‘Torture’ has also been documented by Serrano’s lens: “Actually torture started for me in 2005 when I was asked by the New York Time Magazine to do a work on torture, you know, Abu Graib type images, and I did one which was the cover of the magazine, of a hooded man. That image and that work was created in 2005 and I didn’t think about torture again until last year when a couple of people told me ‘why don’t you look at torture, why don’t you think about doing torture’ and I said OK.”

We are proud to announce our collaboration with Andres Serrano on his recent Torture series https://t.co/kZ2k7Fvkozpic.twitter.com/vV4Us3SoCe

Andres has also documented a growing urban problem;
homelessness: “We have a project about the homeless that I did couple of years ago in New York called “the resident’s of New York” where I photographed homeless people in the streets. But I didn’t want to call them homeless because it’s such a cliché so I called them ‘Residents of New York’ to acknowledge them as residents of the city. Now Michel Draguet the director of the royal museum in Belgium liked that work so much he asked me to do the same in Brussels.”

Andres Serrano: Residents of New York. Installation in W4th stop – faces behind homelessness in NYC. I dig this. pic.twitter.com/KojtUCGBlo

The artist continues to challenge authorities, institutions, hypocrites and our own internal vision of the outside world.

“I’ve learned from so much art in my life that I feel I don’t need to look at it any more. So a lot of the time I don’t know the hottest artists, the hottest photographers, but I know the classics and I know… I know what I know and I know enough and that’s the point. At some point your life become so filled with some stuff, you don’t have to look at it any more, you just have to get it out.”

The show runs in Avignon until June this year.