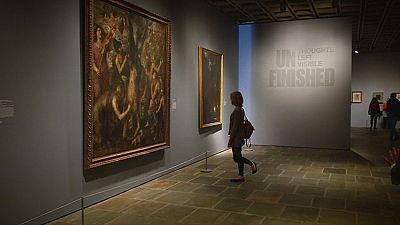 <p>New York’s Metropolitan Museum of Art has a new venue for contemporary art and performances: the Met Breuer opens its doors to the public on March 18, on Manhattan’s Upper East Side. </p> <p>The Madison Avenue building <a href="http://www.architecturaldigest.com/story/breuer-building-history">designed by Marcel Breuer in the 1960s</a> was formerly the home of the Whitney Museum.</p> <p>The opening exhibition brings together 190 works, including from Jean-Michel Basquiat, Paul Cezanne and Pablo Picasso, around the fascinating theme of unfinished art.</p> <p>“The idea is that we chart all these different types of notions of what ‘complete’ means,” said Sheena Wagstaff, who chairs the Met’s Modern and Contemporary Art department. “Essentially the entire exhibition centers around one key question, which is at what point does the artist feel that his or her work is complete?”</p> <p>The exhibition, titled “Unfinished: Thoughts Left Visible,” features pieces dating from the Renaissance, including paintings by Titian and Da Vinci, as well as 20th century works by Andy Warhol and Jackson Pollock.</p> <blockquote class="twitter-tweet" data-lang="en"><p lang="en" dir="ltr">The Met Breuer’s inaugural show examines the marvels and mysteries of unfinished art: <a href="https://t.co/ukIXmdnnEd">https://t.co/ukIXmdnnEd</a> <a href="https://t.co/XFWVvRQjRP">pic.twitter.com/XFWVvRQjRP</a></p>— The New Yorker (@NewYorker) <a href="https://twitter.com/NewYorker/status/705916764471877633">March 5, 2016</a></blockquote> <script async src="//platform.twitter.com/widgets.js" charset="utf-8"></script> <h3>The Met reclaims its mission</h3> <p>Curators have also included a performance art space that will rotate artists in residence. This month, it’s the American musician <a href="http://bcove.me/b1wpf3fv">Vijay Iyer</a> . He will perform solo, with other artists, and will also curate performances by fellow musicians and performers.</p> <p>“As a New Yorker who comes here all the time … to see this sort of new relationship to what’s happening today is very exciting. And it’s kind of a new galvanizing moment for those of us in the art and music world too,” he said.</p> <p>Thomas Campbell, the <span class="caps">CEO</span> and director of The Metropolitan Museum of Art, said the Met Breuer is a natural extension of what the Met originally set out to do: collect everything from antique to contemporary art.</p> <p>“In the early 20th century, the art that was coming out of Europe — Cubism, Fauvism — was considered to be too radical and we pulled back from collecting it with the well known result that MoMa, The Guggenheim and The Whitney were created in the 1920s and 1930s,” he explained.</p> <p>“We started collecting modern and contemporary again in the second half of the 20th century and we’ve begun to build up a significant collection. But it’s clear our audience is really interested in seeing more modern and contemporary art at The Met. So we’re reclaiming our original mission and we’re responding to audience interest.”</p> <p>The Breuer building is being leased for eight years and the Met plans, later on, to add a wing at its main building on Fifth Avenue to specifically showcase modern and contemporary work, Campbell said.</p>