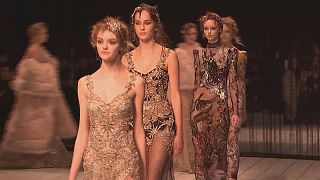 Alexander McQueen has made its highly-anticipated return to London for the first time in over a decade.

The iconic British label, which usually presents its collection during Paris Fashion Week, unveiled its upcoming womenswear on a labyrinth catwalk.

“The idea of all of this lovely femininity that has a bit of an edge we’re seeing everywhere, certainly all the embroidery, the use of details and adornment and embellishment on top of the leather pieces are just superlative. You know, when you come to an Alexander McQueen show, Sarah’s (Burton) hand is far more than just ready-to-wear. She is truly a couturier at every level and it’s like watching a fine couture show,” said Ken Downing.

McQueen himself was famous for his daring creations and avant-garde fashion shows. Trained as an apprentice on London’s Savile Row, the designer, who committed suicide in 2010, was one of the world’s leading fashion talents.

Burberry made its customary dramatic impact on London Fashion Week with a dazzling show of items for both men and women.

As of September, the brand will be pioneering a new approach, the “straight-to-consumer model” with items available to buy immediately after the show.

And British design whiz kid Jonathan Anderson, who picked up awards for both his men’s and women’s wear at the British Fashion Awards in December, presented a collection of modern cocktail wear.

Skirts with ruffles and rara layers had upturned rubber hems, tops were A-lined and both tunics and trousers were flared. Chiffon sleeves billowed at the elbow to produce the distinctive angular silhouettes for which the young designer has become celebrated.