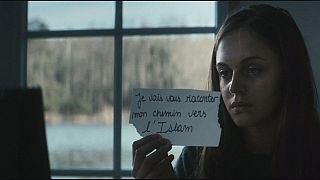 Some transatlantic teen fever was added to the Berlin mix when Nick Jonas of the Jonas brothers jetted in. The rock star plays in hard-hitting movie ‘Goat’ about the darker side of student fraternities in America.

Directed by Andrew Neel, the film focuses on one such place where violence is common as part of its rituals.

“I spoke to a lot of people on fraternities you know I watched ‘Frat House’ which was an amazing documentary that really helped give some perspective, but also I was on a college tour playing concerts at colleges around the time, about a month before we started shooting,” said Jonas.

It is another of the smaller, arthouse-style movies that make up the Panorama section of the Berlin Film Festival.

Algerian filmmaker Rachid Bouchareb hopes his new film ‘Road to Istanbul’ with Pauline Burlet and Astrid Whettnall will help raise awareness of what it is like for parents whose children decide to go and join Islamic State in Syria.

‘‘I was very moved by the parents in Europe, the mothers, the fathers, who all of a sudden realised that their children had gone on journeys, whether to Syria or Iraq… And that interested me, that human dimension of a father or a mother who is going to discover something that they could never ever have imagined to be confronted with because of their child,” explained Bouchareb.

Astrid Whettnall was up for the challenge of playing a mother on the edge of disaster.

Belgian actress Whettnall stars as Elizabeth, a single mother living in the Belgian countryside with her 18-year-old daughter Elodie, played by Burlet. Life suddenly changes one weekend when Elodie fails to come home and Elizabeth discovers she has gone off with her new boyfriend to try and join Islamic State in Syria .