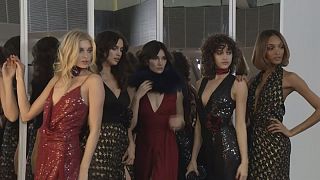 New York based designer Zac Posen was inspired by an exceptional woman for his autumn 2016 collection.

This collection is called Love Power, and it's very much inspired by the fluidity and grace of dancing. We'll be taking everybody through the journey of the season

The celebrity favorite says he had in mind Princess Elizabeth of Toro, “who gained a level of fame around the world in the 1960’s for her kind nature stunning appearance and exceptional intellect”.

The Ugandan lawyer became the first East African woman to be admitted to the English bar. She was also a successful model and covered American Vogue in 1968, and was briefly the foreign minister of Uganda in the 1970s.

His show at New York Fashion Week started with cashmere and wool-blend pieces trimmed in velvet, many paired with ribbed turtlenecks.

The asymmetrical theme of the show travelled from day to night on both gowns and jackets.

Carolina Herrera stayed true to her feminine palette with her autumn/winter 2016 collection presented at the indoor courtyard of The Frick Collection museum on Manhattan’s Upper East Side.

The New York-based designer said the collection was inspired by her idea of beauty but also explored new technologies and multi-dimensional embroideries “that were made as if in 3D”.

Dresses breezed through the atrium of the museum.

Selected pieces featured cut-out jasmines that appeared to float on the clothing.

The Herrera woman will be kept warm with a selection of lamb, wool and shearling jackets.

Gowns seemed to move on their own as organza, velvet and lame were cut perfectly to frame the body and catch the wind.

Von Furtensburg said: “This collection is called Love Power, and it’s very much inspired by the fluidity and grace of dancing. We’ll be taking everybody through the journey of the season.”

Von Furstenberg presented a series of five vignettes in different stage areas. It allowed guests to spend as much time as they wanted looking at a particular garment, and up close.

The vignettes were meant to convey different places in a woman’s life: traveling, working, getting ready for a party.