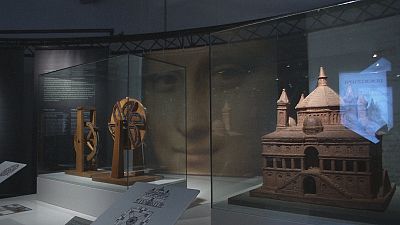 In total there are 39 historical models on display. They were originally constructed in Milan in 1952 to celebrate the 500th anniversary of Leonardo’s birth.

Martin Kemp, Emeritus Professor of the History of Art, Oxford University, says: “It’s shows an aspect of Leonardo’s sheer fertility of thinking, this extraordinary inventiveness whether he’s inventing disciples for a last supper or a flying machine, he’s got this amazing, amazing imagination.”

While many are familiar with his artworks – including the ‘Mona Lisa’ – this exhibition explores Leonardo’s impressive collection of mechanical drawings.

Da Vinci was employed in a workshop on the site of Florence Cathedral at the age of 20.

It was there he began crafting drawings of cranes and machinery, often trying to improve their efficiency.

The exhibition shows how Da Vinci was often inspired by nature’s response to certain challenges, such as flight.

Kemp adds: “He said nature made the most perfect inventions, there’s nothing superfluous, there’s nothing lacking. Now, it doesn’t mean to say if you’re making a flying machine you make it with feathers and flapping, it’s a different job, you have to make it for human beings.”

Da Vinci demonstrated a radical approach to many challenges, including that of underwater diving.

He designed a mask to make it possible to breathe underwater in order to caulk the hulls of boats without having to move them onto banks.

A 15th century leather diving suit was designed for military use, including underwater attacks, sabotage of enemy ships and maintenance of port defences.

Da Vinci often created designs for waging war, including a cannon mounted on a rotating platform.

“There was a tendency in the past to say Leonardo invented everything whether it’s a helicopter or refrigerator or whatever,” says Kemp.

“We now know he’s part of the context, there are other people doing these visionary designs and in a way if we put him in context he’s even more extraordinary because the legendary Leonardo is not credible.”

“Leonardo da Vinci: The Mechanics of Genius” runs from 10 February to 4 September at London’s Science Museum.