Look Beyonce and coldplay are not appreciating my culture. This is appropriation. Stop trying to defend them. It is what it is. 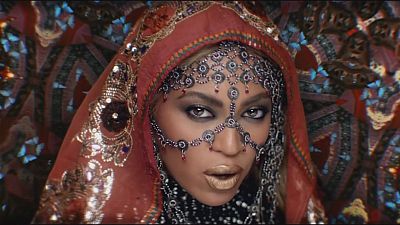 Coldplay has felt the force of social media surrounding the video for its single Hymn for the Weekend, the second song from the band’s new album, A Head Full of Dreams.

It features Beyoncé as a Bollywood star but users have labelled it as a “stereotypical” portrayal of India and even accusing it of “cultural appropriation.”

The singer plays an over-the-top exotic heroine called Rani, or Queen, and is dressed in traditional Desi adornment.

i dont even know what to say about this coldplay video except can white rock bands please stop filming holi videos in india, thank you.

But the question being asked is, should an Afro-American be dressed up as a Bollywood star?

Directed by Ben Mor, the video is shot in Mumbai.

It contains scenes in which colourful powder is thrown, as is the custom in the Holi spring festival, with kids jumping into water and dancing in the streets.

So what’s the big deal, you may ask? Some say that the video cuts out real life and only shows glamorised images of a developing country, while others have praised it for showing the brighter side of life of Indian culture.

The debate is still open.

Aside for the furore, the video’s had had 15 million views on YouTube and counting since its release at end of January 2016.

Former One Direction star Zayn Malik’s debut solo single Pillowtalk has shot to No 1 in the charts in 60 countries on the day it was released for sale online.

The music video for “Pillowtalk” sees Malik, who is launching his solo career simply as ZAYN, cosying up to his rumored girlfriend, model Gigi Hadid.

The R ‘n’ B track, which includes expletives, is a departure from the clean-cut pop he released with his former group.

The release of the song comes days after One Direction unveiled an updated new music video for their latest single “History” – the band are now thought to be on hiatus.

Malik spent four years in One Direction, which was put together on the UK version of The X Factor.

His debut album is due out in March.