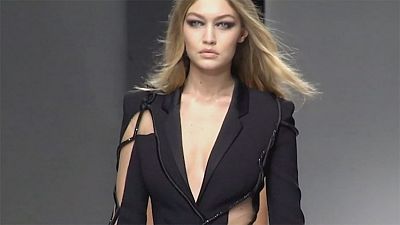 The Italian, who shows annually during Paris Fashion week envisioned his latest collection as a love letter to Paris – a thank you to the city which has allowed him to express himself through couture for the past decade.

The show started with a range of white cocktail dresses in silk and organza, embellished with ruffles and embroidered with crystal roses, branches and more.

Colours were bright and joyful, while silhouettes were inspired by the Empire period.

Designer Donatella Versace opened the show, dubbed “Athletic Couture” in a palette of white – bomber jackets and trousers or skirt combinations as well as short dresses decorated with fluorescent yellow or orange straps.

Models strutted down the catwalk in Versace’s typical figure.hugging designs, namely a range of evening gowns, slashed at thigh, draped at the back or cut along the body and tied together.

The looks were accessorised with sandals with straps knotted at the ankle, some of them sparkling.

The show must go on and indeed it did at the French house Dior as the director-less label unveiled its Haute Couture Spring 2016 collection in Paris.

Expectations were high as this was the fashion house’s first womens wear collections since the departure of Belgian fashion designer Raf Simons, who unexpectedly left Dior in October last year.

The responsibility for this collection fell into the hands of two longtime Dior employees: Serge Ruffieux and Lucie Meir.

Ece Ege, the Turkish-French founder and creative director of the Paris based high fashion brand unveiled the collection “Woven Tales” inside the Musee des Arts Decoratifs.

Sombre trees and a dark background created the feel of an enchanted forest.

A carnation pink coat, capes with architectural details and peplum blouses were among the standout pieces.

Tailoring featured heavily in the collection, whether it was tapered trousers or tweed jackets nipped in at the waist.