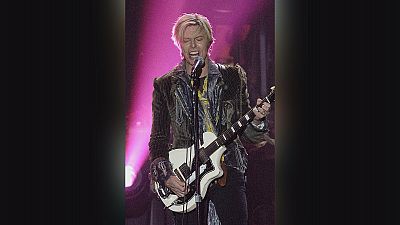 David Bowie took up many striking and unique personas during his five-decade long career.

Ever the chamaleon, he changed his look and music style time and time again. He also moved quite a bit, working in the UK, the USA and Germany. It’s his time in Berlin that is widely considered to have been his most creative.

Following news of his death, fans gathered in front of Bowie’s former Berlin home in the Schoeneberg district, where he lived and worked from 1976 to 1979.

Bowie had moved to Berlin to clean up his cocaine addiction and revitalise his career. He was interested in the burgeoning German music scene and, together with his flatmate Iggy Pop, he started working with Brian Eno at the famous Hansa Studios near Potsdamer Platz, where they recorded the so-called ‘Berlin Trilogy’, made up of the albums ‘Low’ (1977), ‘Heroes’ (1977) and ‘Lodger’ (1979).

Heavily influenced by German bands like Kraftwerk and Neu!, ‘Heroes’ reflected the zeitgeist of the Cold War, symbolised by the divided city.

At the time West Berlin was a creative melting pot of Germany’s avant-garde music scene. The ‘Berlin School’, a style of electronic music, and the Punk and New Wave influenced ‘Neue Deutsche Welle’ emerged there in the 1970’s.

Inspired by Bowie’s music, British musician and producer Mark Reeder moved to West Berlin at the end of the Seventies: “You know, he presented this single ‘Heroes’, his first track on his friend Marc Bolan’s TV show. And it was like, I saw this TV show and I was at home watching this and I just couldn’t believe this. ‘What is this new David Bowie song?’ It sounded completely different to anything else,” explains Mark Reeder. “And you know, the actual period of David Bowie living here, working here, making three albums, set a kind of precedent for other artists. It meant something to come to Berlin at that time, you came to Berlin to have your Berlin period.

“He got to Berlin and saw it was different, because it was full of artists and full of transvestites and full of weird people who didn’t fit in to normal society, and I think he really enjoyed his time here. It was really important for him, because he could be himself, he could find himself. David Bowie in Berlin, it was like a journey of self discovery,” says Reeder.

Bowie came back to Berlin in 1987 where he gave a concert on the Western side of the Wall as part of a three-day event, which also included performances by Eurythmics and Genesis. Hundreds of young East Germans gathered on the Eastern side to listen, shouting ‘The Wall must go’. Eventually, the East German police cracked down on those getting too near the forbidden no-man’s-land. Hundreds were taken into custody. Two years later, the Wall came down.

Bowie albums have been flying off the shelves since his death was announced, and his latest, ‘Blackstar’, looks set to become his first ever number one in the US.

In the video of his latest single ‘Lazarus’, released just days before his death, Bowie can be seen lying in a hospital bed with bandages over his eyes – a haunting video carefully crafted by the iconic artist as a final parting gift to his fans.

Bowie bows out with Blackstar shining