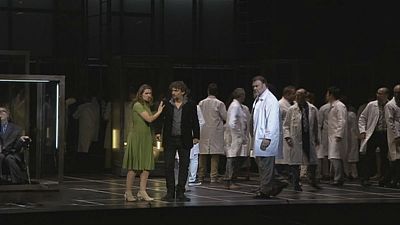 An apocalyptic atmosphere is summoned in “The Damnation of Faust”.

Hector Berlioz’s masterpiece has returned to the Paris opera with the great tenor Jonas Kaufmann as Faust and luminous bass-baritone Bryn Terfel as Mephistopheles.

The ancient legend of Faustus, an alchemist who was tempted by the devil, became a rich source of inspiration for many composers of the Romantic era.

In this bold production, stage director Alvis Hermanis chose physicist Stephen Hawking as the Faust of the 21st century, with his desire to colonise other planets.

“Well in this particular case the director has this image of taking Faust to Mars with a one way ticket. So that’s his damnation,” says Bryn Terfel.

Berlioz had been obsessed with Goethe’s Faust ever since reading it and in a burst of enthusiasm he composed eight scenes which he later transformed into this masterpiece.

“Berlioz never intended to write an opera, not even an entire piece of music, just some sequences. It is really an atypical piece for the stage but at the same time there is an incredible intensity in this music,” says Kaufmann.

“It’s a piece of a jigsaw,” adds Terfel. “He was one to definitely experiment with the orchestra.”

“Berlioz didn’t have a very easy life,” says Kaufmann.
“He wasn’t too successful, although he was incredibly talented as we know today. He didn’t play the piano, only the recorder and guitar, which are not ideal instruments for a composer, and considering these circumstances it’s astonishing how many modern elements he integrated in his music.”

Whereas Goethe’s Faust is saved, Berlioz chose another destiny for his.

“I think that Mephistopheles certainly has to have the upper hand and I do like the ending of the Berlioz damnation,” says Terfel.

“He was quite extravagant with the ending, which he completely made up. In Berlioz’s fantasy, Faust rides off with Mephisto, into the abyss, into hell, and there they are welcomed with satanic chants,” agrees Kaufmann.

A great duo in Paris: Kaufmann and Terfel