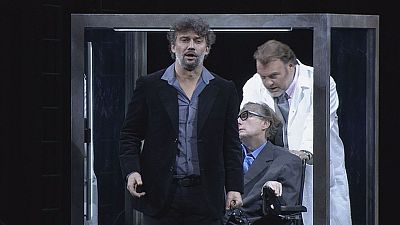 <p><img src="http://www.euronews.com/media/download/articlepix/berlioz-musica-bonus-bb1-211215.jpg" alt="" /></p> <p><img src="http://www.euronews.com/media/download/articlepix/berlioz-musica-bonus-bb2-211215.jpg" alt="" /></p> <p><img src="http://www.euronews.com/media/download/articlepix/berlioz-musica-bonus-bb3-211215.jpg" alt="" /></p> <p>Opera singing stars Bryn Terfel and Jonas Kaufmann <br /> have been working together for quite some time and know each other well. </p> <p>“Bryn is a fantastic singer, a great bass-baritone, who has so many incredible qualities, who can sing Parlando really well, who can push the limits, but who also has this incredible soft and enticing quality to his voice,” says Kaufmann.</p> <p>Welshman Terfel is equally complimentary.</p> <p>“Where can I start with this incredible burst of energy into the operatic world? Jonas came from nowhere but now it’s like a big ship on the ocean with the winds blowing strongly. And it’s an absolute pleasure to be onstage with him. He is a very dominant character and definitely wants to work, concentrated all the time, incredible well prepared,” he says.</p> <p>Bryn Terfel has celebrated a milestone birthday this year: The bass-baritone turned 50. Time to take stock and reflect on his life.</p> <p>“Your development as a musician, as an ambassador for your country, is something very important. Along the way you’re given wonderful opportunities. I was given the Queen’s medal for music, the second recipient of that. I’m a Commander of the British Empire, it only shows that maybe of course you do your work within the profession but also you’re trying to give something back. So all these things are part of that journey, it’s like a jigsaw coming together.”</p> <p>Jonas Kaufmann has also reached the zenith of his career and feels ready for Verdi’s epic “Othello”.</p> <p>“Othello happens in June 2017. Before that I will perform in “Die Meistersinger” in Munich in May/June 2016. Othello will be performed in London. There are some other things on the table. The time has come that I have to make a decision when I’ll sing Tannhäuser and Tristan.”</p> <p>Taking on the Wagner monoliths is a daunting prospect, requiring intense preparation. Some singers never even try.</p> <p>“It’s about time because the planning goes five, six years ahead, sometimes even seven years. If I count now the years that I have left, I know that I should throw the dice pretty soon.”</p>