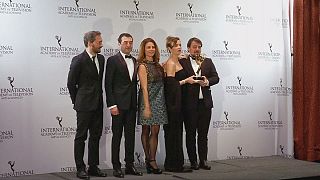 France has triumphed at
the International Emmy Awards at the New York Hilton picking up three prizes in the arts, TV movie and mini-series categories.

The French cops and lawyers series ‘Spiral’ was honoured for series five.

Anne Landois is the executive producer:
“More than ever I am so proud to work and to write about the work of the police. I want to say ‘thank you’ to the police because you know about the events that happened last week in Paris.”

The Man who Saved the Louvre won the arts award.

The film recounts the actions of the Louvre’s wartime director Jacques Jaujard, who saved many masterpieces from falling into the hands of Nazi theives during the Occupation of France.

Dutch actor Maarten Heijmans won the Best Performance by an Actor for his portrayal of singer-actor Ramses Shaffy in the four-part mini-series ‘Ramses’.

He plays the French born Shaffy who became one of The Netherlands’ most acclaimed performers.

The Best Actress award went to Norwegian Anneke von der Lippe for her role in the film ‘Eyewitness.’

Two girls witness a mass killing and fear for their lives.

A double victory for Brazil, ‘Sweet Mother’
gets the last laugh with the comedy award and ‘Imperio’ collected the Telenovela.